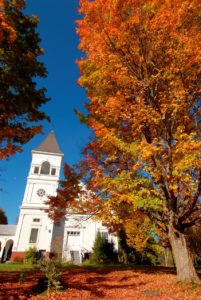 A reputation built one customer at a time.

Since becoming the Noyle W Johnson Insurance Agency in 1951, we’ve grown from two to just under 50 employees in three locations and we continue to expand.  That’s a testament to our customers’ trust and satisfaction.  We’ve achieved that through dedicated leadership, a commitment to serving our communities, always offering the best products and services available and having experienced agents and staff.  We take pride in our organization, its history and its future and we look forward to showing you why.

The agency was started in the quiet town of Plainfield, VT by the Gale family as a secondary business to their hardware store. This startup had a relationship with the Union Mutual Insurance Co. in Montpelier which was founded in 1875. The Gale Agency was one of their first appointments.

During this period the agency was run as a secondary business by several merchants in Plainfield.

With only 10 policies, Noyle Johnson acquired the agency from his father-in-law, Orlando Martin, a prominent statesman and Plainfield businessman. The agency became known as the Noyle Johnson Insurance Agency with offices in the large brick house on High Street (US Rt.2) in Plainfield.

In no time, with Noyle’s full-time focus, the business increased ten-fold. During the next 25 years, Noyle purchased several small local agencies to supplement his growing agency, one of which was the Morse Agency in Danville, Vt., now known as the Sawyer Agency.

Wanting to expand the agency with financial services and a life insurance department, Noyle filled this role by recruiting Peter O. Hood who was at that time selling life products for the Aetna Insurance Co.

Noyle sold the agency, including the brick office building, to Carroll and Peter.

The agency opened a branch office on Elm St. in Montpelier with Tim as manager.

David O’Brien joined the agency as a producer.

John Blackmore moved to Danville, Vt. and became a branch manager of the Sawyer Agency.

A big year for the Noyle W Johnson Insurance Agency: The Plainfield and Elm St. Offices were closed and merged into the current location at 119 River St. in Montpelier. At that time, the agency reorganized and departmentalized, enabling further expansion and more efficient work structure.

The Ritchie Agency in W. Barnett was purchased and, along with most of their staff, merged with the Danville location, changing the name to Sawyer and Ritchie Insurance Agency.

David O’Brien became an owner and part of the management team.

Sean Starr becomes an owner and takes over management of the Barre office.

Peter Hood retires after 39 years with the Noyle Johnson Group.